I saw tonight a discussion about CPU usage being 100% at irregular moments, which makes it very hard to figure out the root cause. Because:

So I quickly wrote my first new node of 2022: node-red-contrib-v8-cpu-profiler

This node allows you to generate a .cpuprofile file, which can be visualized via third party tools as a flame graph (e.g. via Chrome Developer tools as explained in my wiki).

Since I have not spend much time on this node, most probably I might have forgotten some things. So it would be nice if some users could test it, before I publish it on npm. You can install it directly from my Github repository (from within your .node-red) folder:

As usual, all "constructive" feedback is very welcome!!

thanks a lot, I installed the module. Is it enough to place it in a single flow? Do I need any input/output connections (e.g. an inject?)?

Where can I find the .cpuprofile file? Is it written to ./node-red?

I can give you feedback probably tomorrow.

Okay, I answered most of the questions by reading your github page ...

I got an output - it worked so far. I could import it into the chrome dev tools.

Thank you very much for this node - now I just need some expertise to interpret the data. =P

I just need some expertise to interpret the data

Yes indeed it is not very easy to start with interpreting flame graphs. I have added a few tips on my wiki, but I am not an expert in this.
If you find anything useful, please share it so I can add it to the wiki...
Or if you have any doubts, just share it here also!

Based on the feedback from @IAmKonni, I have completely rewritten my wiki tutorial. It now explains a step-by-step about how to find the root cause of high CPU usage in a Node-RED flow.

I have added two new features:

These changes allowed me to write a new tutorial on the wiki about "Create a profile for high CPU usage at unpredictable times". Summarized: when the CPU usage is above 90% for 5 seconds, then it tries over and over again to record a CPU profile of 10 seconds long. That way users should be capable of profiling peaks that they cannot profile manually.

Version 1.0.0 is good enough for me as an initial version:

I am having ultra high load permanently and woanted to check it out with your node.
Nodered runs under Docker, which itself is under Ubuntu VM (Proxmox).

I get this error when deploying your sample flow:

Any tips on how to solve this?

I found out, that the high load came from some MQTT node, that could not reach the Broker.
Still have no clue, why that would produce such shift load though.

Hi @jjm9,
I have no idea about that.
Had recently another issue (totally not related to yours) with the v8-profiler-next library that this node uses. They told me that only LTS versions of NodeJs were supported. Not sure which version of NodeJs you use?
Bart

System runs in a docker container under Ubuntu VM in Proxmox.
So I am not actually willing to mess with bringing NodJS to another version than supplied by the actual docker image.
Michael

Hey @jjm9,
I see another recent issue that is a bit similar to yours, but not exactly 100% the same:

Error loading shared library ld-linux-x86-64.so.2: No such file or directory

That issue should be fixed in v8-profiler-next version 1.9.0 which has been published on npm two weeks ago.

Hey @BartButenaers I'd like to check the version, but I am not exactly sure how to do that.
In the v8-profiler-next folder, I couldn't find out anything about it. 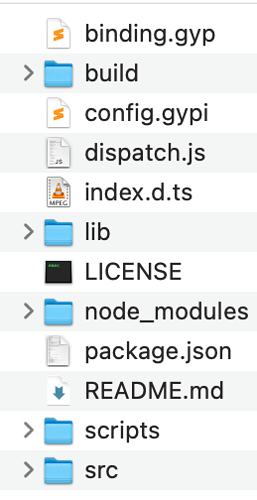 @jjm9,
On my Windows portable I check that like this:

This way you see which version of that library is being installed and used by my node.

Or if you have Node-RED running in a Docker container, you can attach an interactive bash terminal to that container (where you can execute your commands):

thats my output for the command "npm list v8-profiler-next":

@jjm9,
Don't know if you still need this, but someone else reported he had solved the same problem (see here) by installing gcompat.

thank your very much! I am on vacation right now, but I will definitely check that out!