Hello,
I store global parameters for my flow such as a user credential, API server URL, alarm destination emails... into flows' environment variables. I have standard subflows that are re-used in many flows that can get their setting this way so I don't have to configure them one by one. 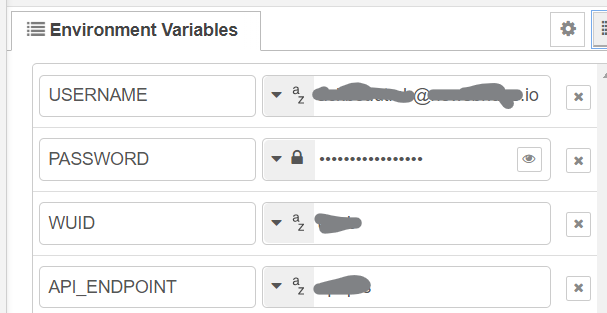 But I'm facing some problems with flow's environment variables (Node-RED 2.2.2 running as docker under AWS Fargate, data folder is persistant in an EBS storage)

I can't figure out the reason
I am 100% sure that the container has not restarted:

Have anyone faced any of those env variable issue ?

Thanks for any hint or advice on how to track that better.

Some fixes went into 2.2.3/3.x around the handling of password type env vars that would be worth picking up to see if they resolve your problem.

When a variable value is changed and deployed, the new value is not necesseraly taken into account or it may take some time

Not sure how that can be explained. Env vars are evaluated and applied at the point in time a flow is deployed. There is no mechanism where an env var value can change whilst the flow is running.

Thanks, I didn't noticed that in the 2.2.3 release notes (not always reading them carefully

) and we are taking some steps to revalidate our flows before upgrading to 3.x
I will try to move to 2.2.3 shortly

For the 2nd point that also puzzle me.
Most often I have a 2 layer env variable:

I'll try to qualify better but that's very rare, but when it happens it is quite annoying as there is no way to insure/force the proper propagation of the flow's env value to the subflow an I often have to do the override to be able to move on.