Help with Node-Red-Node-Ping and multiple NIC's

I am currently using NodeRed on my Pi400 (version 2.2.2) as a general network monitoring GUI.
Its pretty simple, and the table I've made just shows the IP address of the device, the ping time and then a hard coded value of what the device alias is (could add more columns for device location, name etc etc). This is all made using pretty much just the node-red-node-ping, with an injector, and a table being made at the end, based on the key/pair values on the IP address list I specify at the beginning.

However, I am now trying to add a new column, which shows the ping details for the 2nd NIC on that machine.

I've tried using the JOIN node, which essentially uses 2 lists which I want to combine.
This seems to work, but it fills the whole first list, with values from the first list, upon the ping executing. THEN (maybe 1/3 second) afterwards, it will fill the whole 2nd list (in the 3rd and 4th row - in this case showing in red because I am using a made up IP list for the 2nd list), which erases the first list.

I went through the code with the debug options, and then, to make sure I wasn't telling it to erase other parts, specifically set the values in the 2nd line of nodes to be "ip2, value2" etc.
However, the fact that I am seeing the expected values from the 1st and 2nd lists in the correct places, makes me think it's more to do with HOW the join node is working, rather than code actually saving with the same values.

If anyone has any advice, that would be greatly appreciated. Can provide the flows if needed, but obviously don't want to share my full network IP address list, so will have to make a 'not got my real machine data in it' version.

Thanks in advance!
Dan

Tabel in action as it is, working: 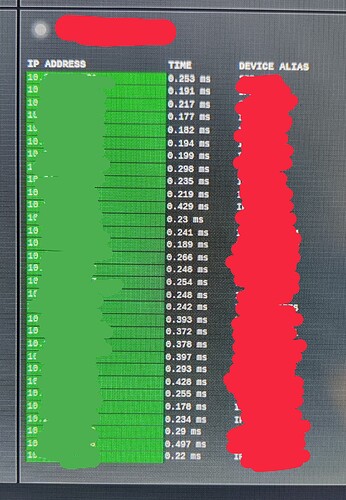 Flows are here if anyone could take a look and see if anything stands out as to what I may have done wrong?