How to trigger a Tasmota device from Node-Red using MQTT?

Hi all,
I am using MQTT a lot to get status information from my Tasmota Devices into Node-Red for further usage.
Next I would like to change the status of one of these devices using MQTT - but sending seems to be much more complicated than reading.

adapted to my setup it would be:
cmnd/sonoff/s095/POWER on

But if I send this to my MQTT device via Node-Red nothing happens: 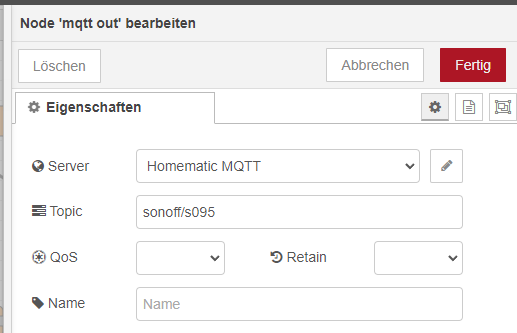 So I assume something in this setup is wrong. Maybe the "cmnd" command ?
I am not sure and did not succeed after several different tests.

Maybe somebody here has an idea ?
BR
G

I think you probably need msg.topic = "cmnd/sonoff/s095/POWER"
and msg.payload = "on"

An example of my 'topic' setup for one of my SonOffs is... 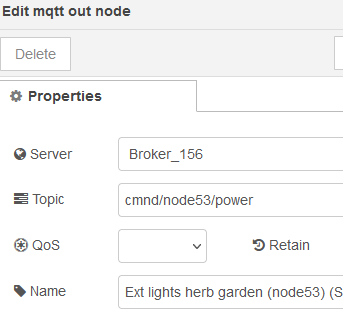 Take a look in the Information option, from the main Tasmota menu, to see your MQTT Full Topic name.

If I do it like that, the command shows up as a new MQTT Client in MQTT Explorer: 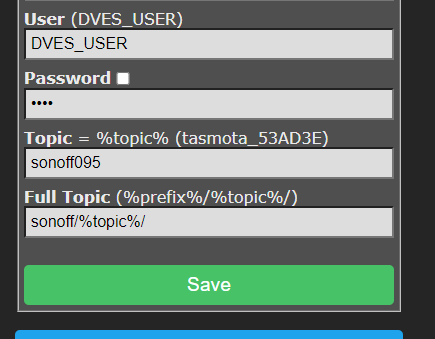 If I send it to sonoff/sonoff095 instead of cmnd, then it shows up here:

I found my topic name (that I use) via the Information option on the Main Menu. 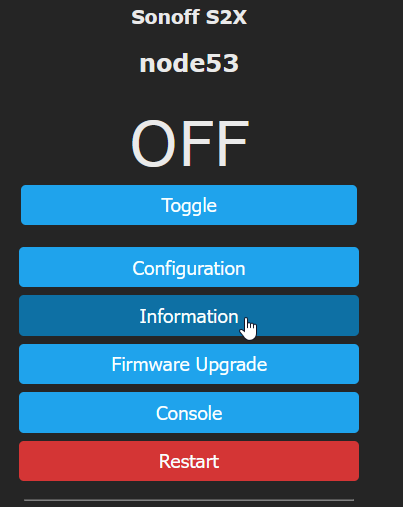 I am using MQTT a lot to get status information from my Tasmota Devices into Node-Red for further usage.

So you do know the topic that the device uses to send an MQTT message.
For regular telemetry it will begin with "tele/"
Does your working MQTT In node have topic set to "tele/sonoff/095/#" or to "tele/sonoff095/#"?

It works now, but it looks weird and I do not understand why it works:

I repeat my question...

Don't know if this would help, but you can use programs such as MQTT Explorer to log into your MQTT server and see all of the messages going to and from it. It may not immediately help fix any problem, but, with a little experience, it does allow you to see what is going on and make better 'guesses' as to what needs to be done

The tasmota command structure has always been weird to me, but ok.

I have also set it up like this for my devices.

Note that you can send 1/0, true/false or "on/off" for power triggers.

To memorize/understand the structure, think of it like the http version:

Normal Tasmota commands over MQTT are (from Tasmota site;

The console in Tasmota is your friend here