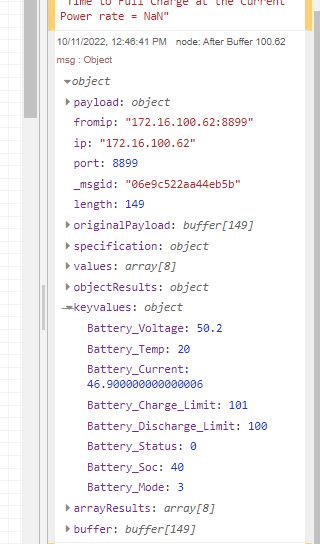 I feel it is something in the $$.msg part of the jsonata but can not get it

Any one out there feeling smart ?

Hmmm - will give it a go and let you know

Yep that got it thanks !

I can not ever see myself coming to grips with Jsonata !!

Neither can I, which is why I use a function node for cases like this. It is all a matter of how one's brain is wired up I think.

I can not ever see myself coming to grips with Jsonata !!

Stick with it. It's incredibly powerful. I spent ages getting my head round it, not understanding the structures and the syntax but now it's my go-to for anything that requires processing data in objects and arrays in messages or variables. I much prefer it to writing function nodes. I've done some amazingly complex stuff with nested and higher-order functions.

It pays to build things up in blocks and test as you go though because if it goes wrong it's a nightmare to debug but it really is worth it for writing concise code to process data.

Out of curiosity why are you using the root variable $$? You don't need that in the simple expression you have in your example. $round(msg.keyvalues.Battery... works fine. According to the Jsonata docs you only need $$ for complex expressions when you break out of the current context to navigate down a different path (perhaps to set a variable you're going to use later or something).

But as Bakman2 pointed out, you don't need msg. either as Node Red now always assumes that you're dealing with something under the msg object (what else would it be?). msg. is presumably left in for backwards compatability because missing out the msg is, I believe, a fairly recent change.

So $round(keyvalues.Battery... also works fine and is now the standard way to do it,

$$.msg.keyvalues... presumably just confuses the hell out of it because you're not supposed to be referencing the msg object.

Thanks Simon for the additional information - i guess that is the major problem as their is no concise reference for how JSONATA interacts within the NR environment.

So whenever i think i will tackle something with it - i do a search on the forums first to see if i can find something close and then start trying to mangle that to fit what i want. If there is nothing on the forums i then go into the Wild Wild West and start searching and that becomes even more confusing.

Anyway - you are right - simplified it right down as you suggested and that works just fine.

Although I fully agree, it can take quite some time to get the data out, depending on the complexity of the in and output. My goto is always: try.jsonata.org, where I can test everything (more) quickly, but keep in mind to always encapsulate the object into {"payload": ...} else it doesn't match with node-red.

but keep in mind to always encapsulate the object into {"payload": ...} else it doesn't match with node-red.

Exactly! That's what I do. I copy the message from NR into try.jsonata.org and do all my testing in that environment. The error messages and syntax highlighting are vital.

I create what is effectively my intended message object and then a separate object to deal with context variables but try to keep the code very similar to what will end up in node red. I try to keep the amount of translation I need to do to get it to work in NR to a minimum such as replacing a standard prefix with $globalContext(. There's always a bit of debugging to do because I'll always make a mistake or two.

If it helps, one of the things I've found most useful in Jsonata is defining functions and variables. You can pull bits of your data out of your message using simple predicate queries and define them as new objects and arrays then apply built-in or your own functions step by step. I've done some very complex translations of data from one format into another.

I have a very promising project creating a flexible human-readable scheduler to control the heating in my house. I'll share it with the class when I'm closer to a finished product (and I have more time).

Exactly! That's what I do. I copy the message from NR into try.jsonata.org and do all my testing in that environment. The error messages and syntax highlighting are vital.

Can you expand more on how to do this please SImon ? This is where i come unstuck with trying to do stuff in JSONATA is the translation between the NR environment. 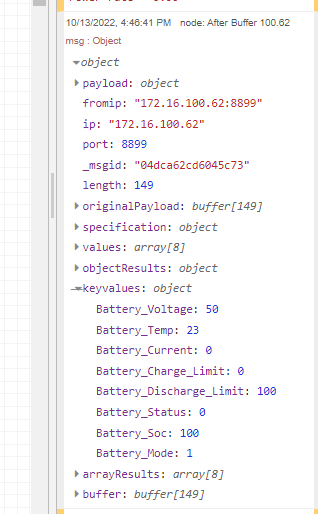 Which is the output from Steve's excellent Buffer parser node - how would i take this and "massage" it to get it working in try.jsonata

And as an aside - would it not be better try and get the inbuilt parser/tester in the NR Change Node to be able to suck a message in and use it as input ?

Which is the output from Steve's excellent Buffer parser node - how would i take this and "massage" it to get it working in try.jsonata

You can easily copy the message (or even part of the message) from the debug window to the clipboard. 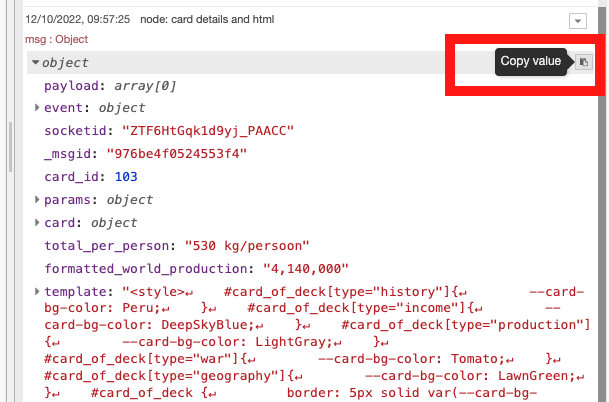 Once copied to the clipboard you can paste it into