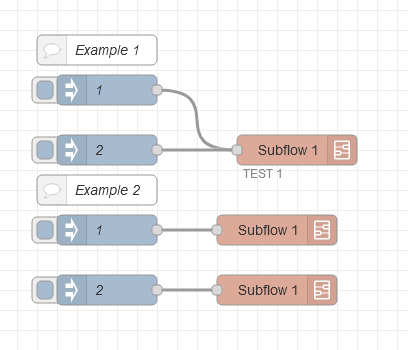 Is there a way to achieve the same result in Example 1 & 2?
It would be nice to have 1 subflow attached and let it act like seperate instances.
Would be useful in combination with for example a ha-server-state-changed with regex collecting states from multiple objects in HA (where msg.topic is unique).

Hey blckshdw. That's a good question. So you want to create a subflow that you can have act as a seperate instance every time you call it. I'm not familiar with the node you're using as I don't have it and can't find it, so I can't speak to the specifics of what it's capable of. But it's an interesting idea.

What's an example of what you're trying to accomplish with this that you would need separate instances for? I can see having a timer for individual items that are separate from other timers, but it would be just as easy to make an individual timer for each item and work that way. In fact, I can't really think of anything where not having its own node would be any easier or more difficult than having a subflow that is somehow singular yet capable of becoming numerous individual instances. I can copy/paste a node or set of nodes to individual items as fast as I can connect them, so there's no speed difference in that regard.

So what is it you're trying to do?

Use a link-call node instead.

I am not familiar with home-assistant, but isnt the whole purpose of it that it is a state machine ? Why not requesting the state when you need it, instead of handling/collecting this completely in node-red ?