Hi uibuilder fans, been rather too quiet on the uibuilder front recently. Been another odd and crazy busy year. However, I'm trying to get back into the next set of improvements for uibuilder and I think it is now pretty close.

If you like to keep up with the latest changes, please feel free to manually install the "v6.0.0" branch direct from GitHub after reading the latest CHANGELOG file so that you know what the requirements are, what has changed, the remaining known issue, and the last couple of things that might make it into v6.0.0. You can also check out the crazy long roadmap document if you want to get a feel for where things are going - you might even get inspired to contribute!

The breaking changes are minor. Just a change from node.js v12 to v14 to align to Node-RED v3 which is also the minimum supported version.

A few annoying things fixed, most importantly the built-in package management should be a lot more robust now an won't flake out if you have lots of uibuilder packages installed.

Not too much brand new stuff. You now have the option to include the client ID and IP Address in standard msgs as well as control msgs. There is a new basic VueJS v3 template to complement the v2 ones. Also a new example demonstrating how to use uibuilder to do some interesting logging. Many thanks to Harold Peters Inskipp for that contribution. 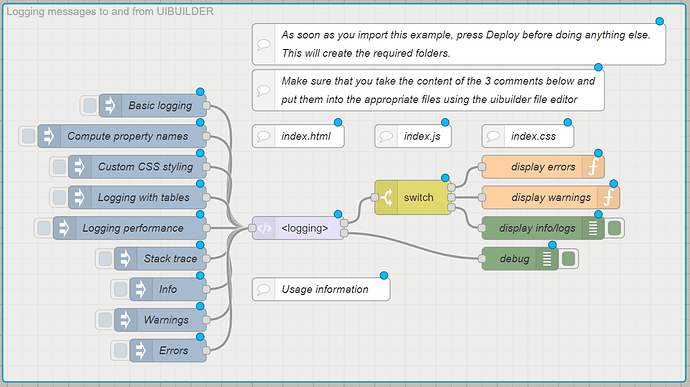 So this won't be a massive release like v5 was but it should certainly bring some welcome improvements.

Also from v6 onwards, I'll be trying to align better to Node-RED releases so expect a major release after there is a node-red major release. If nothing else, I want to push forward on node.js baselines since we need at least v18 when top-level await should go live and be stable. That should then start to open possibilities for converting from the current CommonJS module format to ESM. In turn, that opens a number of other possibilities.

Have fun and please give any feedback in this thread.

Awesome! Looks like my system going to sleep was causing one of my issues and I didn't even know it (one less thing to track down). Thanks for all of your hard work, and the shout-out too.

Still to do before release

Possibly a few other things from the CHANGELOG "To do/In-progress" section might still make the cut. Any that don't make it to v6.0.0 will be transferred to the roadmap page.

And now fixed the page name processing for the old client, also boosted the old client's version number. Added a new "Did you know?" page to the docs.