Hello there,
has anyone any idea on how to catch these warnings from the opc-ua Client node? 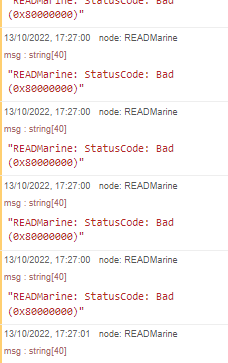 or from any node that puts out warnings.

Kind of like a Catch node but for warnings. It would be useful to restart the flows when I get a specific error from any node.

Hello there, I'd like to know if there is a way to disable the verbose logging in the Debug panel generated by the plugin node-red-contrib-opcua as you can see here: [image] It's useful but it prevents me to use the debug panel for debug purposes. Thanks a lot in advance, Fabio

Actually not, I'd like to catch warnings to use them in another flow/node, the question you quote is asking for a removal/disabling of such warning messages.

It's very similar to this one:

How to "catch" node.warn(msg) General

I love using the "catch" node to catch all errors from a flow and then pipe them to any notification system like Telegram, Email, etc. Is there anything similar that works with node.warn()? How could I catch .warn() messages and send them on to some notification system?

Sure, ok, it was implicit I guess but I was trying to point out that warnings are NOT catchable. (the reason other OP wants to disable them)

You would have to request to the author that he changes these to errors AND includes the msg object in order for them to be catchable.

Alternatively, request that warnings are output on a separate output of the node.

As it stands, it is not possible.