I want to be able to change each tab separately in terms of style. For example, I want a piece with a static text such as rooms with references underneath to other pages such as the bedroom. Below I have added a photo of what I mean in terms of design. I haven't figured it out myself and hope someone of you can help me. 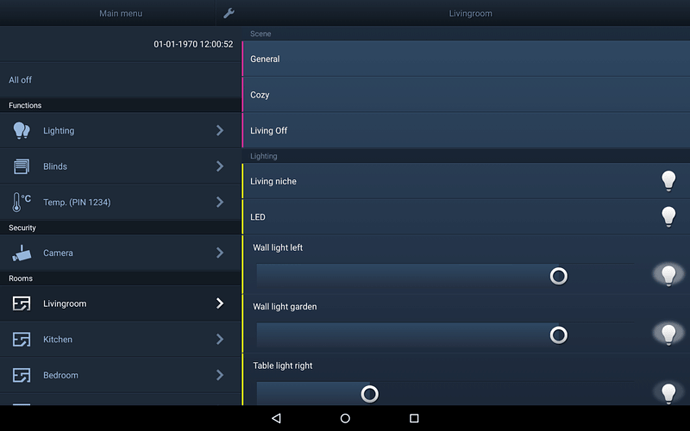 I don't think that can be done in Dashboard. You would need to create your own dashboard using a different node.

Thank you for your answer. I am kinda new to node-red so I dont understand what different node you mean.

While Dashboard is great for beginners and can create some amazing UI's with little to no code. It is based on some complex and somewhat dated in places code which means that it has its limitations.

A number of other people are working to try and bring a new generation of dashboard and general UI creators to Node-RED and you can search through the "Flows" site (link at the top of the page).

My own attempt to help is the polar opposite of Dashboard. It starts by creating a node and a library to support easy(ish) creation of data-driven web apps and isn't tied to a single front-end framework like all of the other dashboard-style nodes are. However, the down-side is that you are more exposed to the front-end code (HTML/JavaScript/CSS) than the other nodes.

So you are left with a choice. Stick with what Dashboard can give you but with the limitations it brings in exchange for a no-code approach. Or learn some code with the help of node-red-contrib-uibuilder. Of course, you should try some of the other dashboard-like nodes as well but some of them have already stopped receiving updates, or, like FlexDash, are still in an Alpha (pre-release) state.