Help with javascript in a function node

I have a Node Red flow that has been working fine for some time, operating solenoid valves for my garden watering system. I have recently replaced the power supply with an old ATX PC type which has a permanent on 5V supply (Standby @ 2A) and a separate lead, which when grounded, wakes up the PSU to provide 12V etc. I have wired the "wake up" lead to ground via relay 4.

Can anyone help me to understand what I have to do to make this work? I'm guessing that the way I'm trying to add the values in the context variables is the bit that's failing. I can see the values of 0 and 1 in the Context Data tab and that seems OK.

I've copied the code below, hopefully, my error will be evident to someone?

As far as I can see, your function doesnt actually do anything. if msg.payload is "on", "off" or even "hello", it will return the same unmodified msg and same payload - everytime. 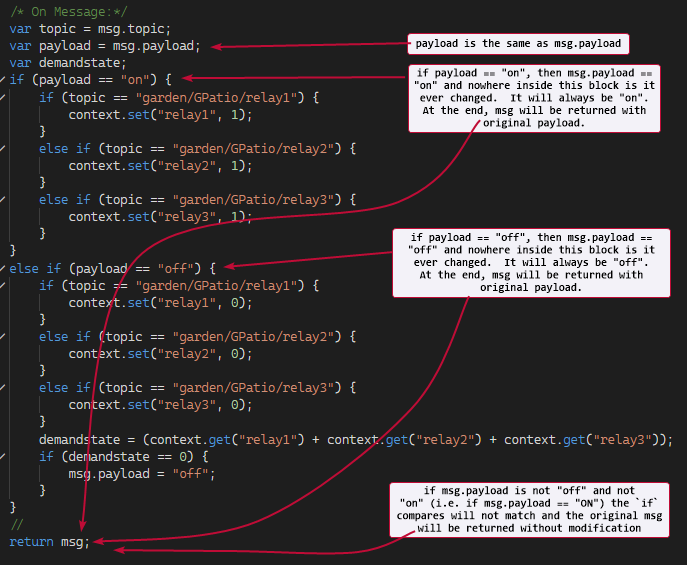 Just looking at it quickly the logic is not working as you expect since you are always returning the msg including the msg.payload that might be "off" but should not. If you change the last bit of your code like below it will only send out "off" when all 3 relays are "off".

Hey Steve, looking at the same

Both you and Steve-Mcl are right and thank you both for the feedback. There isn't that much wrong with my actual code, other than I struggle to get syntax right; it's just the logic that's up the Swanee!