Any thoughts on this? 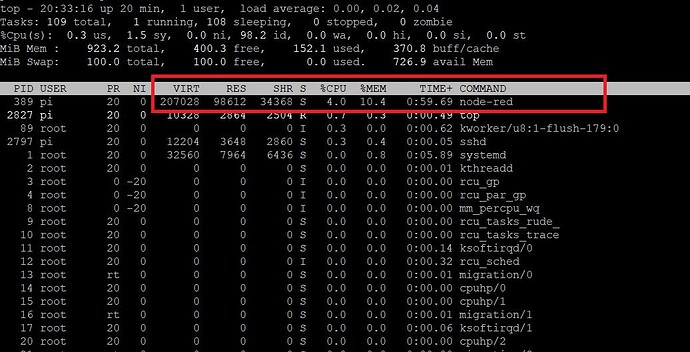 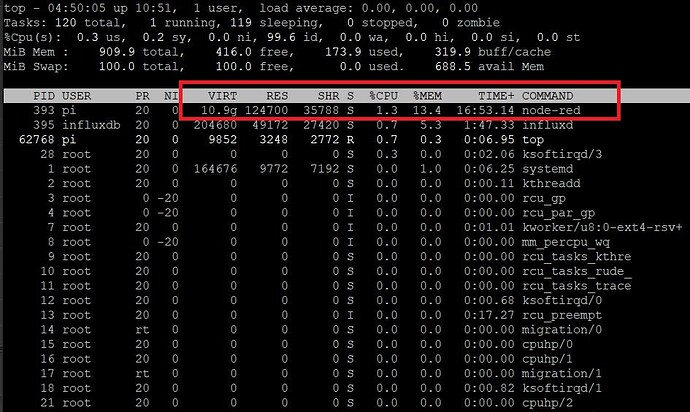 Don't worry about it, virtual memory is not real memory. You can see it is still only using 13% of your 1GB of RAM.

If you are really interested then do some research into what the virtual figure actually means.

Not unusual - this from a 64bit Intel laptop which is my home server:

And yet you can see that the server is very happy:

@Colin @TotallyInformation Thanks much. This confirms my thoughts.

So it is worth upgrading to 64-bit OS for RPI 4 with 2GB memory and above.

Will run some testing on RPI3 1GB version.

continuous writing to RPI4 2GB version can go up to 3 days.

Unless you are running too fast for the system to keep up then it should not fail after 3 days or 300.

4 sensors at 3.2KHz sampling rate in parallel. Write data to influxDB in batch (grouping data points together and write in batch. Otherwise the database will have problem much earlier.)

Wow! What data are you sampling?

Are you writing the data to the SD card or have you got a hard disk plugged in?

This is an extreme test case to check system limit on our ends.

Normal usage won't write that much data and that often. Typical DAQ time is less than 5 minutes per hour.

Probably you are writing too quickly and the card can't keep up. You can check that using the iotop command.

If it is important that the data are not lost then don't use the card for storing the data, use a hard disc or SSD.

In real applications, we use faster micro SD card than the one in testing.

Hard disc or SSD is not ideal for industrial environments, where the micro SD cards are installed inside the wireless gateways that could have tough conditions. Yes we use hard drives or SSDs for servers inside the control room.

Obviously, you will want to have spare cards in stock and have them preprepared ready to slot in. You may want to consider a simple config script to ensure that the card can be made production ready with all software updates and device specific settings with minimal effort.

You are right that extra card space gives extra life, since there is algorithm that writes to the card intelligently to reduce the wear and tear.

The card speed is well within the limit.

What is causing the system to fail after three days then?

For 32-bit OS and database, the problem could happen after 1 and half day (Please note that the DAQ duration is much longer than our recommended system usage limit. Typical system usage is a few minutes per hour. )

For 64-bit OS and database, the failure may be due to the reason that the system run out of space.
At the end of the 3rd day, the database size is more than 25GB. The card space is only 32GB. When we add the virtual memory size of 10GB and database size of 25GB, the total is more than 32GB. After 3 days, database read and write still work well. But the CPU will go more than 100% usage very often at idle state.

I've seen that happen with InfluxDB on a Pi before. Letting the db's get too large will do that I think.