Scratch 3 and NodeRED working together

He said "almost ready" on twitter a few days ago 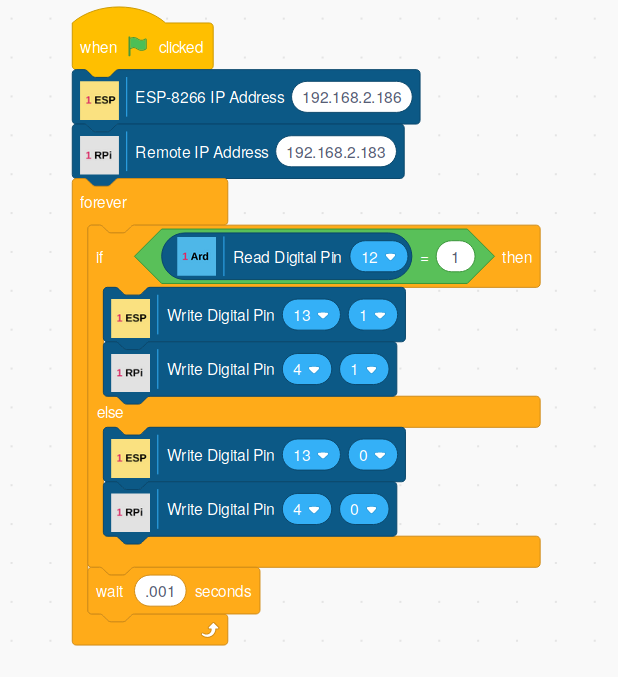 Almost ready to release #s3OneGPIO #Scratch3 extensions for Arduino, ESP-8266, and Raspberry Pi. The script below is running all 3 simultaneously. A button on the Arduino is controlling an LED on an ESP and remote RPi. Finishing up on the Python servers. https://t.co/8fUYq5j2qQ
dynamicdave 10 October 2019 12:30 #22

Hi Simon - that sounds really exciting.
Looking forward to hearing about its release.

Do you know if there is a MQTT extention for the desktop version of Scratch ?

Do you know if there is a MQTT extention for the desktop version of Scratch ?

I could knock something up to have a Scratch Desktop mod utilise a python prog running on same machine within a few days if that would be good enough?

Hi Simon,
Thanks for the kind offer.
I'm interested in this because my students have PCs in the IT Room where I run the IoT Club.
They use Chrome on the PCs to login to Node-RED which runs on headless Raspberry Pi(es).

Most of them already know how to use Scratch, so being able to talk to their Wemos D1 Mini devices from Scratch via MQTT would combine two sets of skills.

I don't suppose it's an issue but all the Wemos devices have been flashed with ESP-Easy.

Hi Simon,
Just checking... how is the MQTT extension (written in Python) for Scratch coming along?

Got POC going but hasn't made it out of pre-alpha

I'll see if I can re-sum enthusiasm for it

I'm back on it - remembered where I was upto

Hi Simon,
Thanks for all your efforts thus far.
Looking forward to hearing of your developments.
Regards, David.

Hello, i am trying to setup this hack on a raspberry using the desktop electron app. I am facing ssl issues.
How can i answer to requests for https://translate-service.scratch.mit.edu:443 from http://localhost:1880 without ssl certificate issues? I can do a apache ssl proxy, but can not inject the right certificates. Basically its a kind of hijacking a https connection, or not? Do you have an idea? Thanks

It's a long time since I worked on this

Like I say, long long time since I did this stuff

And because it's all local - no HTTPS needed

Hi, Thanks for your answer. Tested ist. The translate extension of the actual scratch3 desktop version on my pi makes https calls. I see no way to answer these requests from localhost. With an apache reverseproxy, you can, button with a valid certificate for translate-service.scratch.mit.edu:443. Do you have an idea? Last time I ask, but getting this to work would be so great for the possibilities we will have in your programming classes.

Like I say, I just ended up hacking the Scratch Desktop electron app, I was then able to make direct calls to my localhost http server

I imagine this doesn't work anymore but maybe worth a go?

Never made it out of alpha though

I'd recommend Alan Yorink's
https://mryslab.github.io/s3-extend/
as a better supported route to using Scratch 3 for physical computing

Apologies to NR users for the off-topic chatter

Perhaps i will find the time to try it. Thank you very much.