Hi,
I try with difficulty to improve my code and so sometimes I have probably banal questions to propose you.
In my node-red project I have many delay node (and I'd like to reduce them) because I always put them between two function when in the second function I need to read the value of a variable set in the previous function.

Example:
I use many node chronos scheduler ... 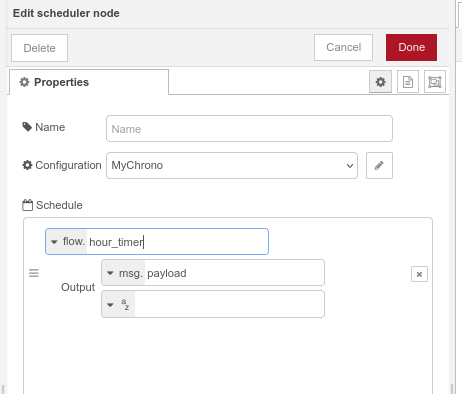 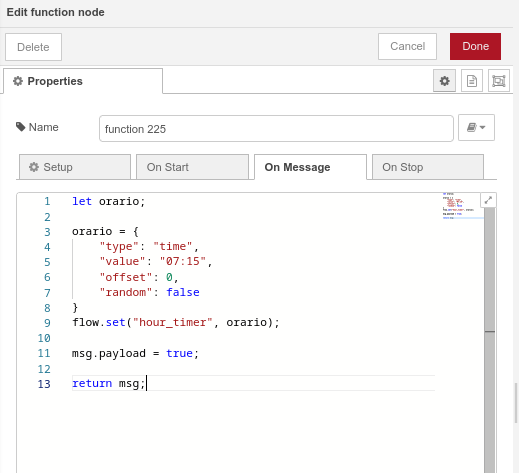 Well, the delay is necessary or independently by the complexity of the function previous (the example in very simple but is not always the case) the node chronos will always be able to read the flow variable also without the delay?

I can't see the value of the delay node in the example you give above.

Your function and scheduler nodes are not both running at the same time.
The scheduler node will do nothing until a message arrives at it's input.
The function first sets flow.hour_timer and then sends msg.

So the delay just provides a window in which flow.hour_timer could be reset by another run (instance? iteration?) of the function or by some other part of the flow, presumably before it is used.

is performed before the

Not simultaneously at the end of the function, as I thought ....

To be honest I don't know how individual actions within a function node are sequenced, but I assume that "return msg" is not executed until "flow.set...." is complete.

I am sure though that the scheduler node will do nothing until after the function node sends a message, regardless of a delay node.

I don't see the need for the delay node. The scheduler node reads the content from the flow context variable at flow deployment (so if the variable is not yet existing then, which is the case if you use memory-based variables, the node will run into an error) and everytime it gets refreshed via the input message (either enable or reload command). At that time, the timers will be (re)started.