Hi All,
Let me preface this by saying that I am not a programmer, but know enough to be dangerous. Also I am using a RPi4 running NR 3.0 and Node.js 16.17

OK here goes:
I am trying to modify an i2c port expander node that uses a hidden chip configuration node to define the port expander chip type. For the moment I am focusing on the browser side (HTML file).
When editing the property of the port node, the user can either select a previously defined chip configuration or create a new one. If the latter, the user selects the type of chip (from a list of 5 different port expanders), i2c bus and i2c address. The range of i2c address options is automatically changed based on the chip type selection. So far so good - this all works.
The user is then returned to the port node's property dialog where a port number needs to be selected (a separate port node is needed for each port on the chip). Ports can range from 0-7 for an 8 port expander, or 0-15 for a 16 port expander. What I would like to do is create a dropdown list for the port entry, where the number of options depends on the chip type selected in the chip configuration node, but have been unable to figure out how.

Welcome to the forum Joe.

This is a standard configuration for nodes. The configuration node type provides exactly the kind of drop-down of existing configs + an entry for defining a new config that you describe.

The docs for creating custom nodes contain the details of how this works and there are many examples you can draw on from existing nodes such as the serial node.

Your main node stores the link to the selected configuration so that all relevant data can be accessed from the .js file for the main node.

Thanks @TotallyInformation . I have read the link you refer to (many times), but was trying to work on the HTML file before having to deal with the .js file. I feared that this may not be possible. I guess the chip configuration node needs to be created server-side before the editor can have access to its data?

Just so I fully understand does this mean the user needs to deploy the port node first before user can gain access to the configuration node's data in the property dialog, which would mean creating the port node with a dummy port entry, deploying and then opening the dialog again to select the port needed and redeploying?

Hmmm....now that I think about it, it is most likely the latter and I have answered my own question

Your main node controls the creation and use of a configuration node. So you add the main node, open the node's config panel then the input field that wraps the config node can be seen and if no existing config nodes of that type exist, the flow author creates a new one. If one exists, it will be pre-selected, ...

Just add an mqtt node or a serial node or any node that contains a config node, you will see how it works.

Hi,
Thanks for trying my node.
I've red 3x your orig. post, still not understand what's your end goal is.

WHY needing a drop down list, if you can:

Did you check the Samples installed with the node?

@TotallyInformation: Understood and I actually use MQTT and have looked into its code. Also for serial port. Key difference is none of the main node's selections depend on the config node's definition. In my case the range of port numbers depends on the chip selected (e.g. MCP23008 has 8 ports, MCP23017 has 16 ports).

@PizzaProgram: I don't need a drop-down, I'd like to have a drop down for a couple of reasons

Given that a picture is worth a thousand words, here goes: 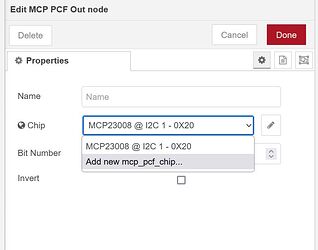 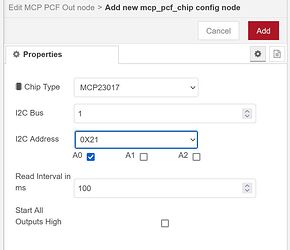 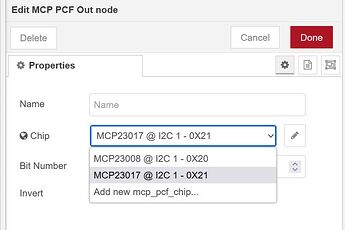 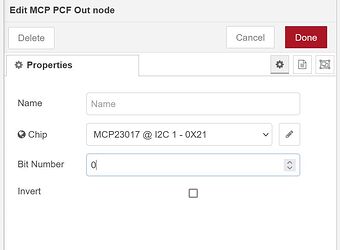 I am starting to get the nagging feeling that what I want is impossible. If so, then I will revert to text entry, but want to verify if what I want is possible.

It is probably possible, but it's HTML scripting thing, I know very very little about.
I was happy to squees out 6 month of my time to learn JavaScript just to finish this node.

So any help is greatly appreciated, If you may have spare time to test.
I think working on stability is 10x more important, than extras.

@TotallyInformation: Understood and I actually use MQTT and have looked into its code. Also for serial port. Key difference is none of the main node's selections depend on the config node's definition. In my case the range of port numbers depends on the chip selected (e.g. MCP23008 has 8 ports, MCP23017 has 16 ports).

I think you might have missed something. Your main node records a REFERENCE to the chosen instance of the config node. That is made permanent when you redeploy. Then your .js runtime file needs to get that reference in the same way you take all of the other .html settings as in this snippet from one of my nodes:

One of the config variables (over-use of the word config I'm afraid) will now actually contain a REFERENCE to the actual instance of the config node's runtime and therefore you have access to all of the recorded settings in that node.

Bear with me here, because I am at (over?) the level of my understanding:

I think you might have missed something. Your main node records a REFERENCE to the chosen instance of the config node. That is made permanent when you redeploy.

When you say "redeploy", does that mean I need to deploy at least twice?

Looking at your code snippet (thank you BTW - I found the actual code on your GitHub repository; copious comments much appreciated) and comparing to what I have:

the missing lines seem to be

To reiterate, what I would like to do is use this.chipType, to predefine the bitNum select options in the editor.

I am somewhat reading between the lines here so please ignore if I am misunderstanding your requirement.

Is that what you are trying to achieve?

Yes, exactly! Setting up a new broker with different protocol, as you suggested, changed what MQTT options were available. In my case it would be a little simpler in that I would want to prefill the portNum select options, but the mechanism looks very much the same.

If you can point me in the right direction, I can take it from there.

When you say "redeploy", does that mean I need to deploy at least twice?

No, only once. A redeploy deploys all changes in the Editor at once.

the missing lines seem to be

Sorry, I later realised that might be confusing. That code comes from my re-worked way of writing nodes which deconstructs them in a way I find more logical. In doing so, you have to keep some other references including a reference to the RED object. In the "standard" way of constructing your node's runtime, you don't need to do that. The multi-layered nature of the node runtime can be very confusing, the way I do it breaks that down into more logical chunks in what I think is a more javascript-like way of working. It is probably only worth doing for more complex nodes (though I now do it for all my nodes since I have a template that makes it simple).

@Steve-Mcl , thanks to your response, I think I am getting close, but there's something I'm not quite getting right. In my case "node-input-broker" id is equivalent to "node-input-chip" id, which displays the chip config being used. Analogous to the MQTT-out node, where the highlighted line in the code snippet you provided resides, I added an oneditprepare option to my mcp_pcf_out node:

However, no matter what chipType I select in the config node, the port list in the mcp_pcf_out node is always 16 long, which to me would indicate that is16Port is always true?

Save and restart node-red.

Open node-red editor in your browser then open devtools (F12).

When you double click your node, the debugger should kick in and you can use break points and inspect code and also try stuff in the console (like trying out jQuery code to see if what you're using is correct)

Hi @Steve-Mcl ,
thanks for the suggestion on adding the debugger statement and how to invoke it. That kind of helped and I had to read up lots on how to use the debugger and breakpoints. However I've hit a wall: I cannot step into the is16Port = function(), so cannot see if if the var chipConfNode actually hass a value, despite having set breakpoints on every line in that function. Step-in is doing the same as step-over?

Also, when you say "try stuff in the console (like trying out jQuery code to see if what you're using is correct)", are you referring to the console tab in the devtools window that pops up when hitting F12 (I am using Firefox)? While this tab shows the code with breakpoints, there seems to be no way I can edit anything showing in that console tab, whether the code is running or not, so I must be missing something.

OK, figured out the console editing part. It turns out the jQuery statement $('#node-input-chip').val() is undefined.

Question I have, do I need to add an oneditsave() function to the config node, to save the chipType value, so that I can refer to it in the main node?

Getting very close: everything works as desired, except when the node is first used with no chips configured.

In the node's main property dialog, a configuration node's settings are obtained in the oneditprepare function using:

which returns an object with all the settings of the relevant configuration. The actual Chip Type is then obtained using chipConfNode.chipType;. In the debugger this shows the Chip Type as selected, except on first instance as described under 1. above, where the property is undefined, even after the first chip configuration node is created, but the main property dialog not closed and reopened.

If this is indeed true, then I am wondering how to ensure the chipConfNode object is defined immediately after creation of the first config node instance?

Boiling it down to its essence:

Although @Steve-Mcl has pointed me in the right direction to get this far, I just need one more nudge.
I am getting so close I can smell it!