Is there a way to search for nodes with an error status?

I had a node that wasn't working, which I discovered just by the fact that my morning automation wasn't turning it off. I brought up the flow and discovered that it was in an error state. I have lots of flows, so I decided to see if any other related nodes were in a similar error state. Is there a way to search-for/find nodes currently displaying an error status? Or is there a way to have the flow tab show like a red badge indicating it contains an errant node?

Just to be sure - do you mean the runtime status beneath the node? (Rather than a configuration issue with the yellow triangle above the node).

The editor doesn't provide anyway to search the node status values. It isn't something that's ever been considered or suggested before.

One challenge is knowing what is an error - the status API doesn't attach meaning to the values the nodes can use - from the choice of colour or shape of the icon. We could include the node status value in the search index so a regular Ctrl-F style search would help you find them.

Definitely worth thinking about.

I understand your quandary about identifying an "error". I don't recall the precise terminology - but I'm referring to the status that shows up under a node with a green or red (i.e. error) dot or circle. I know that those can be customized, so there's not a universal status to hook onto. But from a user standpoint, I'd want to know if any node has a red dot under it (with or without an attached message). Or, you could have a "status board" that shows every currently displayed status in a persistent fashion (i.e. not like the debug tab where messages only new messages show up). And clicking on one would bring you to that flow and scroll to the associated node.

You could also a a current count of actual errors thrown that you see in the debug panel that mimmics say, a browser's javascript console or vscode's status bar at the bottom - whether you have the console up or not, there is an error icon with a number next to it in whatever view you're currently looking at.

Anyway, yeah... it's something to think about. Searching for a status value would help, but you would have to know what to search for. 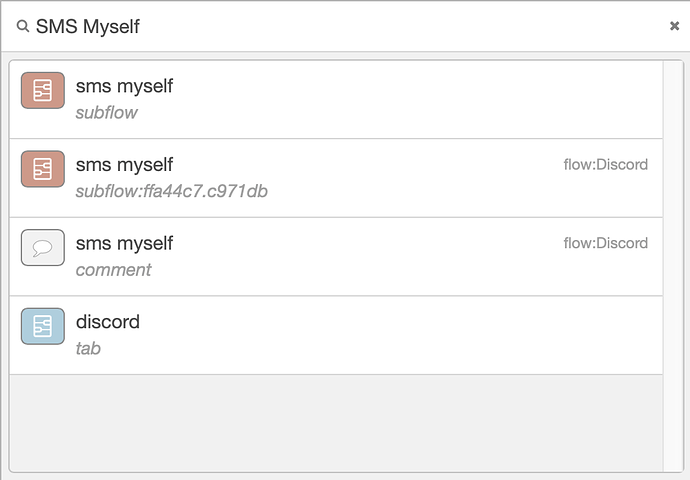 If you're going to add the status, it would be nice to also add the "subflow name" from the "Subflow" section in the second screenshot.

That named subflow instance (Bed Fan Off Msg), is not among the search results. The only subflows it returned are the subflow template itself and the instance in my Discord flow.