Node-red-node-pi-gpiod in docker on raspberry pi 4 returns TypeError: next is not a function

I'm having an issue with using pigpiod on my host pi, with nodered running in a docker container. the pigpiod nodes error out when triggered with TypeError: next is not a function, below i pasted my bugreport which i also posted on github.

Which node are you reporting an issue on?

What are the steps to reproduce?

Create Docker iamge according to below Environment
Ensure pigpiod is running on Pi 4
Create two Inject Nodes (true/false) attached to PiGPIOd Output node configured as below. 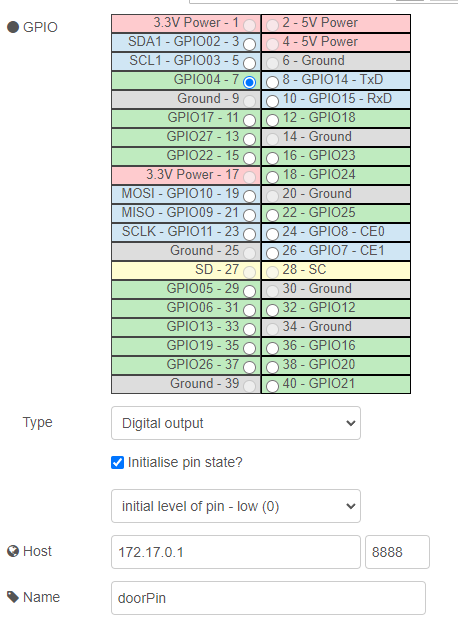 msg:error
TypeError: next is not a function

What do you expect to happen?

Changing Pin from high to low or other way around

Please tell us about your environment:

I don't think this is a bug, I believe you will have to open up the ports to allow the docker image to talk to the pigpiod daemon. Hopefully you can determine what ports are needed from the docs.
Alternatively, don't use Docker. If you don't need to then it is simpler not to, as you are finding out.

I just got it working, not sure why tho. I created a seperate network for the nodered Docker Image. i changed the pigpiod demon to accept connections from one specific IP in the network i just created. and then it worked. Docker shouldnt need to open outgoing ports, only for incoming requests that should be needed.