I am trying to use a PID node.
Node-red-node-pidcontol works weird. If you change the setpoint using msg.setpoint, then although the value on the dashboard changes, but in fact the PID works with the previous setpoint.
How to work with other PID nodes (for example, node-red-contrib-pid) I can not understand. The coefficients are in seconds. How do I set them if I had these values: 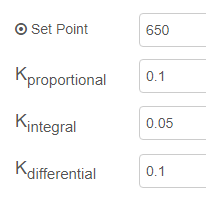 The reason that the proportional band is in real world units (degrees C for example) and the integral and derivative terms are in seconds is so that they relate to the real world. Work through the tuning guide and you should see what I mean.

Can't I just convert my coefficients to seconds?

I don't really know. Some times ago, I spent a lot of time to experimentally select these coefficients. The process itself - ventilation speed based on data from the CO2 sensor.

Exactly, it does not mean anything in the real world. The node you were using was written by a mathematician, not an engineer.
Follow my tuning guide and you should have it going in little time. Make sure you chart the output, the setpoint and the power output so you can see how it is going. If you are not using something like influxdb and grafana so you can go back and look at old charts, then take screenshots of each run and keep a note of the settings so that you can look back at previous runs.

Thank you. I tried to understand the article.

Yes, though with pb=0 the control is on/off so it doesn't matter what Td and Ti are set to.

The integral locked error appears all the time. What is the reason?

That tells you that the current value is outside the proportional region, which it will always be when pb=0.

There is no time to tune your PID controller yet. But I realized what was wrong with Node-red-node-pidcontol. I have the PID set to REDUCED CO2 to 550ppm with ventilation. But when there is no one in the room CO2 drops to 400ppm and the PID starts trying to "raise" the value up to the setpoint. In this case, the value at the PID output reaches several thousand! (normally 0-100). Because CO2 does not rise if no one is breathing, even if the fan is not running.
Apparently, since this PID does not have a separation between HEAT and COOL and there is no limit on the output value, then this cannot be corrected.

That is what the integral lock is designed to prevent.