The big benefit of having visual feedback on the connected state of the input port is noticeable when you have a wire running underneath a node, but not connected to it, like this...

Very nice, indeed. I stumbled upon that sort of error myself when the "insert node when hovering over the wire" feature misbehaves. At the moment I always check the connection by moving the inserted node around a bit. Very hard to find otherwise.

I only ever do that when I want to debug as well as output. So I only ever do it with nodes that kind of "finish" the current flow. Typically a link-out for example but also mqtt-out or similar.

Anywhere else, I would never overlay the wires like that.

It's a pretty simple implementation (for svg, that is): the input port is an svg <polygon ... > element with its list of points determined by the number of incoming wires --

Hi Steve,
Very nice! Where do I need to update those polygons?
Bart

And can it be made into a PR for Node-RED itself? Maybe as an option (for those who want to keep the visuals clean).

@shrickus I know we discussed this before, but can you remind me if there was a particular reason you modified the port shape rather than put an arrow head on the wire? I don't want this thread to stray too far off topic (as its primarily about the vertical flows, not other changes to the appearance of flows), but I'd be interested to know if that's something you tried and discounted for some reason.

I'm less inclined to modify the port shape, but I can certainly see adding an option to show an arrow head on the wire would be helpful. That will still make it clear if a wire is connected to a node or passes underneath.

For what it’s worth the added arrow to the wire, and the usual consistent look of the square ports, looks cleaner and less messy to me.

That said, if the problem is whether ports are connected (rather than also the need of seeing the direction of the flow (which I think is less of a problem)) maybe a change in colour of the connected (still square) ports is enough?

Of course, if there’s going to be vast choice of node flow directions in the future an arrow may be wiser.

The issue is that if there are N wires, then there are N arrowheads -- and if they don't all line up exactly, it looks messy (and it's less efficient to draw). With the way the bezier curve tangents work, my implementation caused the arrowheads to be slightly off horizontal, but it looks like your implementation solves that issue... (hmm, maybe not, since I don't see multiple wires attached at different angles)

The advantage to putting an arrowhead on every wire is that each node does not have to know how many wires are attached, and since that information is stored on the source node (instead of the target), I can see why you would want to not change the shape of the node's port.

Either way, glad you are thinking of implementing arrowhead... one less piece of Editor customization I'll need to worry about in the future -- cheers!

I had to jump in on this with some opinions ... of course.

Just some thoughts ... this is a really interesting potential addition that I like!

Whilst there is some way to go, I've taken the code from @sakazuki and started exploring some of the issues discussed here.

In the short term, I expect we'll enable vertical flows via a flag in editorTheme - at least whilst we figure out how vertical and horizontal flows co-exist (if at all). Later on, we'll have a similar flag to enable/disable any ability to change the flow layout from within the editor directly - we will not force those who embed Node-RED to adopt this sort of change.

I've also been making some tweaks to the appearance and wanted some initial feedback. 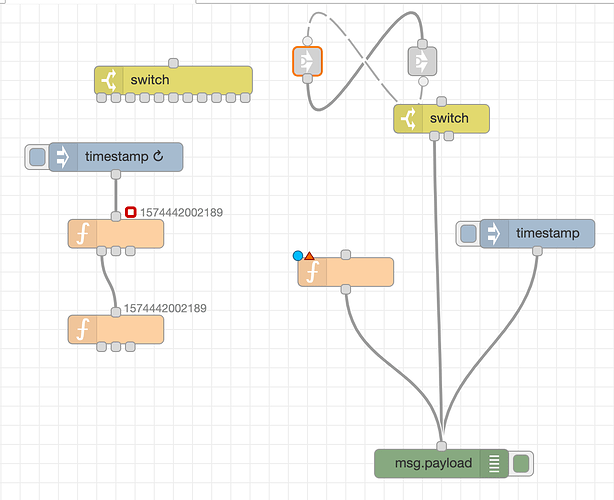 All of the follow applies only to Vertical mode:

If you want to follow along at home, this is happening in the v-flow branch on github.

Nice! I could easily see a variation of this becoming the future Node-RED logo - representing it's infinite capabilities

Oooooh, feedback loop. Will it make a noise?

Looks good Nick. while it is something I would probably not use as I find it is simply not my thing, I am sure others will be delighted with the progress this is making. Just a random question:
If I import a flow, in either variation, will it automatically be converted to the view I have set in my preferences?

If I import a flow, in either variation, will it automatically be converted to the view I have set in my preferences?

Right now it's a setting of how the editor displays a flow, not a property of an individual flow.

As I said, there's still lots to figure out - such as whether this becomes a flow property or remains an editor customisation.

There are lots of other points to consider yet, as my previous replies to this thread have highlighted.

I've also been making some tweaks to the appearance and wanted some initial feedback.

Very nice. I think you're well on the way to answering the request, so I'll play Devil's Advocate or just be annoying again. Doesn't visual consistency require:

These changes might be a bit jarring to current NR users who are trained to read flows from left to right, but they would make sense to new users who don't have that prejudice. How hard they would be to implement is another matter.

Well, no. The goal here is not to flip the entire UI - only those bits that make sense to.

We don't want to completely change the appearance of nodes - their icons sit alongside their label. The nodes expand horizontally to fit the label. There is no benefit to growing the node vertically - that would just be wasted space.

I see this as a important benefit of the vertical flow. That the nodes grow horizontal and the flow vertical. So there can be more information about the flow and connections on a scree.

The goal here is not to flip the entire UI - only those bits that make sense to.

Agreed. I only meant to offer different (odd?) ideas on where to draw the line.

icons sit alongside their label

Indeed, but there is information conveyed by whether the icon is to the left or right of the label. To extract this information, the user has to scan the node from left to right. Admittedly, this is not a lot of information, and I suspect it is usually ignored. Still, the visual logic I was driving at is that the flow should be scanned as much as possible in only one direction. The current horizontal layout is almost ideal on that score. I suspect that the "vertical" one will require a certain amount of "mixed" scanning, and I was trying to minimize that.

Would using both vertically and horizontally wires on nodes within the a single layout ever be considered?

You the option in the json could change the default appearance of the nodes, but if you go to the 'appearence' tab for the node where you change the label and icon, it would be nice to have an option there for horizontal or vertical wires/plugs/connectors for that node only.