Hello, since a few days I test NR Docker.
I use Portainer.io to manage my containers. It's quite simple.
Now I want to be able to use the serialport node to read what is on the USB port (RFlink card) of my OrangePi.
So I found the place where to bring up the ttyUSB0 port in the container, but there is still a problem of access rights. I don't know how and where to add the node-red user to the diaolout group or maybe launch the container as root?

Would you have any suggestions, solutions to help me.

Inside the NR container:

maybe you also need to check if your dialout group exists in your docker container an is having the same group ID as your host machine.

I read in the documentation that you have to launch the container with the addition of the user to the dialout group,
but I can't find the way to make it work under portainer.io
Syntax error ?

this is what i see under the Pi for USB0

With portainer GUI, we don't use dockerfile

i tried to translate this specific command with no luck actually

What is your actual command to run the container ?

Sorry, I don't know, because everything is hidden by the portainer.io GUI.
Here is the container log, it seems that the additional command is taken into account, at least I have the impression.
I tried to change the User by root, so I lost my flow but still the access problem.

The --group-add option is a docker run option and not a node.js option.

You should be able to specify it somehow when creating a new container.

yes indeed, I will try to understand the dockerfile commands and run it by hand.
I may ask the question in the portainer forum.
I looked in the directory used by portainer, it seems that it uses its DB to store its configuration, no traces of a readable file

Did you use this tool or do you pass the commands by hand?

How do you add node red in portainer? Do you specify a docker image?

The image is: nodered/node-red (it takes the latest) 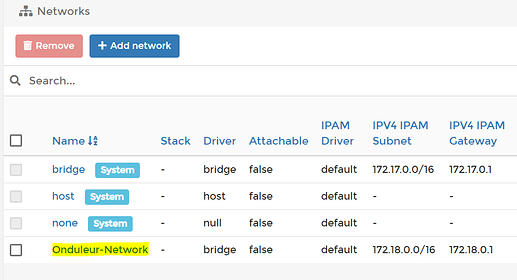 and fill the yellow fields 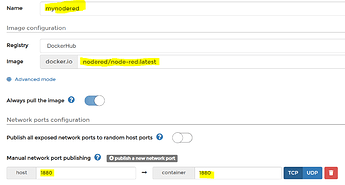 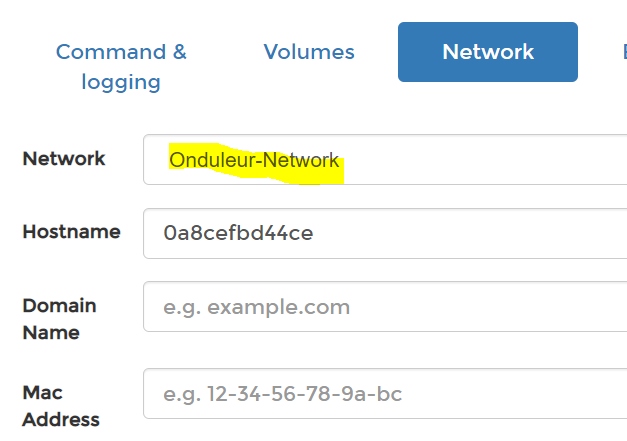 And press Deploy and that's it

So one solution would be to build your own image with the appropriate modifications.

I'll do some digging, I have a feeling it's just a syntax problem in the Command field.

build my container, probably the next step

For now I want to stay with the standard

I'll do some digging, I have a feeling it's just a syntax problem in the Command field.

I don't think that is your problem.

The command field allows you to specify the docker CMD for your container.

You can of course create an image from a simple container that is adding the dialout group for node-red user (see my earlier post) and select this image in portainer when adding a new container.

I understand that you have created your container by adding the container via portainer.

I just asked the question in the portainer.io forum.
If I get a positive answer, I'll come back to put it on my post

I just found this possibility into Portainer.io.
This could be the place to write the orders used when creating a container

Now you can deploy a container using image node-red-with-dialout-permissions:latest in portainer as you used to do.

I have tested this and it works for me as you can see in screenshot below:

It does indeed work. Great

You have to do things on the command line. as often
I'm going to get an arduino to connect to the USB and see if there is a real dialog that goes back to NR.
I'll give you a feedback as soon as I've done the manipulation.

Yes, it works.
Except that the name USB0 has become ACM0.
Changed this in the container and the flow, Et voilà !

I really appreciate your help in moving forward on the docker path.

So, if I understand correctly, I can create an image with the nodes I need in my flows in the same way.
One question, what about the configuration-flows-credentials files.
Will they be included in the image or will they be left separately ?
The ones in my case /data that physically point to /var/lib/docker/volumes/node_red_user_data/_data ?