I am using Node-RED for automatons inside Home Assistant (both on latest version).

I try to control a curtain-pair using two ‘Aqara lumi.curtain.agl001’ (zigbee) motors.
My problem is that I do not manage to set or get the curtain cover positions

There is a service called “set_cover_position”, however I can not make that to work. Below some pictures of my actual test-setup.

Above you see that I did define three devices:

For reference the only thing I could get working (but that is NOT the intention), is a service node with a fixed position defined inside like this 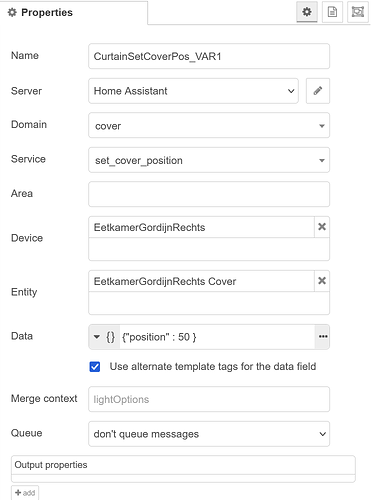 For even easier testing I also used an "inject node" directly connected to the "CurtainSetCoverPos node". As said regretfully I did not manage to get it working

So my questions are:

Welcome to the forums @louis,

As your using Home Assistant Specific nodes, you may be better of asking the HA community.
Most here do not use Home Assistant, and are Node RED users only.

I do not understand that. Does not take away that you are probably right

In my perception, you have the following layers:

So in that "layered" model Node-RED can not function without layers beneath it. So I wonder how the overall stack used in the "Node-RED" model looks like

PS, I asked the same (original) question in the HA forum (but I expected more success here)

For reference the only thing I could get working (but that is NOT the intention), is a service node with a fixed position defined inside like this

That Data field, what can you select there, I assume you should be able to pass a msg(.payload) as data input ? What does the documentation of the node describe ? I believe the home assistant nodes have quite extensive documentation available.

Perhaps I fixed it, but I am not sure. The curtain control is surely not yet working as it should. Apart from this issue which I may be solved, a better zha-driver would surely be appreciated.

But for now I tried the following 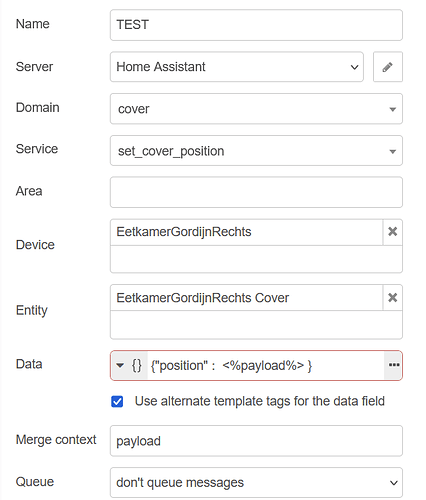 What is may be working (no errors)

Then set the value to {"position": payload }