For a long time I didn't use link nodes.

Only when I started multiple tabs did they become viable and I saw their use.

Between tabs is a given for them as you can't put a wire between different tabs.

Since using link nodes, I have established a couple of rules. I may post them in another thread.

So, I have a link out node connected to a link in node on another tab.
I select the link out node and an orange link appears showing the links to other tabs.
To get to them, you click on the desired link name and the editor jumps to that tab.

Alas this doesn't work if the links are all on the same tab.

Now, usually if it is on the same tab, they aren't needed. But as I have since learnt: That doesn't always hold true.

Usually flows start in the top left corner and grow from there.

This is because the node's in is on the left and the out is on the right.

So as the flow progresses, you connect an out to the next node's in. Thus it goes from left to right.

Now and then you need a wire to go from the right to the left.

Not a bit problem, but sometimes aesthetics come in and those wires going the wrong way don't look too nice.

In those cases you use the link node.

An option to go to the other end of a link even if it is on the same tab.

This may require not so much the node to allow this, but the virtual wire. But I think that wouldn't be possible because of the nature of how that part works.

So similar to when the link is to another tab:
A small tree pops up listing all the connections.
Local and remote.
Local links are also shown similar to remote links, but then virtual wire then exits the text and continues to the other link node on the same tab.

So the internal link would go through a box similar to the one shown in red then continue to it's node. 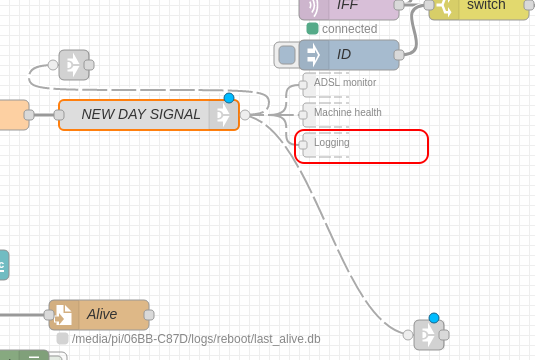 Maybe the box could be solid rather than dashed, but I think that is more an aesthetic thing than a practical thing.
That the virtual wire would exit the right side should be enough of an indication it is on the same tab.

Doesn't it show the wire back to or from the other link node when you click it?

Yes it does. But if it is at the other side of the tab it is annoying having to scroll the screen while leaving the wire active so you can trace it.

If you accidentally click the wire disappears and you have to start again.

It is only a suggestion because I am (more and more) doing just that.

I am at the right of the window and there is a link that goes to the left side (bottom to top, or top to bottom also) and it is not fun scrolling the window.

This is painful because you can't just use the side scroll bars as you lose sight of the wire.

MMB click/dragging works, but it is slow and you have the chance of clicking LMB as mentioned and losing the wire.

I make my flows always fit completely in across the screen so that I never have to scroll sideways. I always keep them no more than one or two screens high also. Any more than that becomes too much to take in I find.
Sometimes I extract a block of nodes that fulfil a defined chunk of logic out to a subflow even if it is used only once a I prefer that to linking to a different tab then linking back again.

You can also use the minimap at the bottom-right corner of the canvas for large flows.

Thanks for the suggestion @Trying_to_learn. Consider it noted.

Whilst there are patterns of use to avoid having wires spanning large distances, sometimes it does happen. Having a quick an easy way to jump to the other end of a wire is an interesting concept that could well apply to all wires - not just those of the link node. Not sure how best to trigger it - I think your suggestion of adding the 'local' nodes to the list of nodes we should could potentially be confusing as you'd have that node as well as the wire. But as a general concept, its worth considering.

If anyone wanted to propose ideas for how this would look then please do share.

I do accept that the normal wires can suffer from this as well.

I don't want to complicate it by making it work for any connection.

inline near the beginning

Is the direction that important?

Though at each end a little thing to click to take you to the other end is still something.