The fourth and next final beta release of Node-RED 3.0 is now available.

We had hoped beta.3 was going to be the last one before we got to the final release. But there were a few issues that were reported against it that we wanted to make sure were properly resolved before doing the final release. We've also happened to have a bit of a in rush of PRs from new contributors that brought some useful new features.

So here we have the next final beta with 24 PRs since the last beta.

If you haven't already, please read through the release notes for beta.1, beta.2 and beta.3.

Note: if any issues are reported against the beta, we'll update this post to list them here. If you hit a problem, please do check back here before adding a comment.

(Some how this feature didn't get mentioned in the ChangeLog...)

We've introduced the optional ability to run Node-RED without the flows themselves running. We already had Safe Mode that achieved a similar result, but with this new feature, you can stop and start the flows directly from the editor. The runtime will remember the state of the flows so when Node-RED starts up, the flows will stay in the same started/stopped state.

This feature is not enabled by default. To enable it, you need to add the following to your settings.js file:

(the exact details of that settings object may yet be tweaked before 3.0-final)

With that set, you get a new option in the Deploy menu: 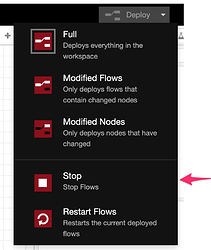 Clicking that option will stop the flows running, but you can continue editing them and deploy changes. Whilst stopped, the Inject/Debug node buttons will be disabled.

When the flows are stopped, the menu shows a start option instead:

We're interested in feedback on the UX of this. There are some bits I think we can further refine - such as have a more obvious indicator in the workspace if the flows are stopped. There is also the existing 'Restart Flows' option - which is more technically a 'Reload Flows' as it does more than just stop/start.

The Right-Click menu was introduced in beta.3. A few issues were raised around its behaviour on particular OS/browsers. We believe this release has addressed those issues.

We introduced the Welcome Tour back in 2.1.0 and it has been updated for each major release. With this release, we've added a way to access the tours of the previous releases in the Help sidebar: 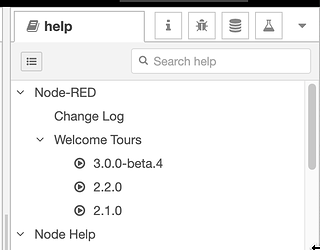 If you want to try out the beta, you will need specify node-red@next when you use npm to update. Without the @next you'll still get 2.2.x

If you hit any problems, please report them either as a reply on this topic, or in the #core-dev slack channel. Please do not post new topics to the forum regarding the beta as that could confuse users who are not using the beta.

As we've said with the last two three betas, this contains just about everything for the final release - but this time we mean it even even more.

There are a couple more minor PRs that I hope we can resolve for 3.0 which shouldn't require a whole new beta release. In terms of timing of the 3.0 release, the main challenge is scheduling the time it takes to do the final release. So rather than promise anything here, just know we want to get there as soon as time allows.

how can i catch start/stop actions in flow?

For start - use an inject set to trigger once

For stop - it doesnt really make sense since the flows are stopped. However, you could always use the "on close" of a function node to perform some task.

cannot import nodes, who can confirm that?

What do you mean by that - can you provide a step by step?

A little off topic here... Sorry

But what will happen with the score card in reference to the min node version when v3 hits.
currently, we get marked for requiring a more updated node version that is required by Node RED 2.x.x.

How is the score card going to work with 2 different min node versions (Node RED 2 vs Node RED 3)
Will the score card remain aligned with v2 requirements?

What do you mean by that - can you provide a step by step?

Never mind - I found it.

Enable the "Insert --> junction" and "Insert --> links" when nodes with wire(s) are selected.

Is there a typo in your post or have I done/missed something stupid...again? (Preemptive excuse: no coffee yet)

The problem is the tag name, it shouldn't have the leading v when created (only the beta's have this problem, will fix for final release) and it's normally not a problem as this build would have been tagged as latest for a release build

I just wanted to report this - it seems it may have been a cache issue.

Just upgraded to 3.0.0-beta.4 and have the NASA-WildFire flow on one of my tabs of a project. Works fine but I decided to move it to a new project. I selected the tab and exported it to the clipboard and created a new project. When I tried to import it This popped up:

I went back to beta 3 and imported it fine so I tried again in beta 4 and this time cleared the caches and it imported fine.

Odd - the problem was due to importMap not being "something" and should be 100% repeatable problem. No matter - it is fixed in GitHib (expect a beta.5 :sigh:)

So here we have the next final beta

Hey @UnborN any chance you could capture a screenshot & raise an issue?