Warning on use of "Creating Nodes" Category?

Is there any way of having a warning if someone chooses the "Creating Nodes" category? Far too many people are using it when they should just be using "General".

It is frustrating to keep getting distracted when thinking I might be able to help someone with a custom node question only to find that it is something basic about a flow.

I correct the ones I come across but there seems to have been another influx of new starters recently who aren't taking the hint.

Maybe the category can have the words ‘custom’ or ‘development’ somewhere in there?

I think this whole board has developed into a complete haystack. Everything is just thrown in without careful sorting. If you are looking for something your only hope is the search feature (or if you repeat the question and someone is kind enough to give you a hint or a link)

I miss the traditional board structure where you had everything better organized, more and better defined categories

I miss the traditional board structure

It "somewhat" exists in discourse, but here is not the default view when accessing the forum (i believe this is a setting)

Yes, true, but you have to agree it should have been made with better granularity from start

When you click on the "category" drop down, that is the one that defaults to the selected and people just LMB on it without really thinking.

When you click on the "category" drop down, that is the one that defaults to the selected and people just LMB on it without really thinking.

Not for me, are you seeing something different? General is the first category shown - which is correct IMO: 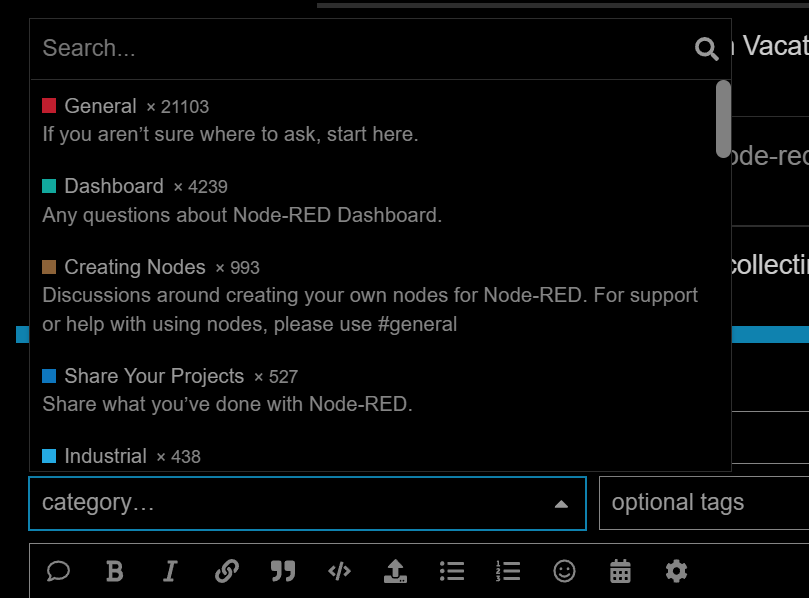 I think this whole board has developed into a complete haystack.

Not sure that is entirely fair. A lot of people are making good use of categories and starting to use tags better as well. Information Management is never easy since everyone thinks differently. Also, there are a few of us doing some moderation and trying to keep things in some measure of order. Considering the growth of node-red, this forum remains incredibly good.

Indeed, the structure is decent I think as I started using the auto-notifications features a while back. 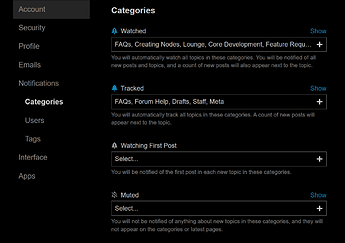 But the Creating Nodes category is the one that is consistently getting abused.

I suspect some beginners think that a node-red program, that I would call a flow, is a node.

Or a category "Beginners"

I agree mostly with what @jbudd says. Some re-wording should be enough

I suspect "Creating nodes" to a new user, fits their own definition/translation e.g. as far as they are concerned, they are "creating" their own something, using "nodes". All words are used but the point is incorrect. Lost in translation so to speak.

I think some clarification / distinction is needed. Perhaps this reads better?:

Would “Using Node-RED” be the place for opening a discussion on possible bugs?

I think there is too much just thrown into "General", many times when it is related to a specific node or a programming thing. So what I really miss is sub-categories for nodes, like if you now would introduce Developing Nodes there could be sub-categories below for the specific node in question. In that way you would organize the board much better

o what I really miss is sub-categories for nodes, like if you now would introduce Developing Nodes there could be sub-categories below for the specific node in question. In that way you would organize the board much better

Part of the problem is trying to make whatever organisation we choose to be obvious and intuitive to users.

We already have a category for questions about creating nodes. We already support tagging questions with the name of the specific node in question (because creating a new category for every node is simply impractical)

So the fact you're asking for things we already have indicates part of the problem.

We chose not to go overboard with the number of categories because it wasn't obvious what would be the right level of granularity. Plus, the more categories we have, the more likely questions end up in the 'wrong' category.

I've no doubt we can improve what we have, but I don't think swinging the other way to having lots of new categories is the right approach either.

It would be worth doing some research on how other popular forums organise their categories and see what we can learn from them.

I wouldn't mind this - though I actually think that General is actually quite a good name for the catch-all category.

So what I really miss is sub-categories for nodes, like if you now would introduce Developing Nodes there could be sub-categories below for the specific node in question. In that way you would organize the board much better

Some of the more popular nodes already have tags. Not really any reason why any node shouldn't have a tag. Anything tagged with uibuilder will show up in my notifications for example. But we will still need to be vigilant because most people won't tag with the full node package name and there are lots of similar sounding names in the catalogue.

As a lot of new users may not have used discourse, would it not help to have a sticky which is visible AFTER login.

With guidance on how to use the forum, with links to posting code, use of categories, FAQ's etc

Might be I have not realized it, maybe not so obvious or it might be just me. Regardless, if you think the "General" section is good as is, then forget, just live with it. I think anyway it is not the best way that everyone just throws any stuff into a big bucket.

I also realize that to keep up a good structure, pretty lot of site management is required, not the most wanted task to take on, but necessary for a good organization. This forum has grown so much, the overview is lost, I even have problems to "quickly" remember where I did put my own comments or questions (I know, search gives me that, but,,,)

The dropdown list is dependent on where on the screen it is.
See this picture: 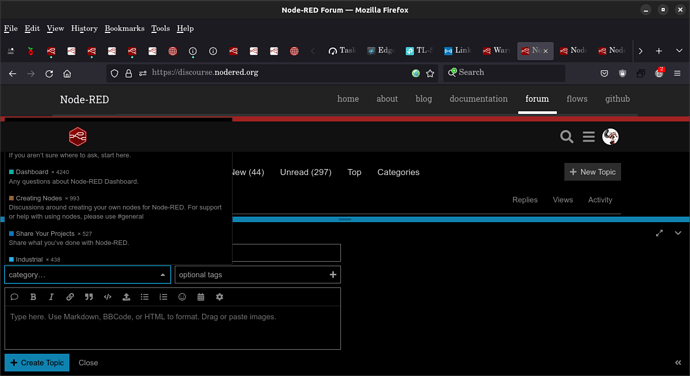 MAYBE if in the wrong place that is the default/under the cursor selection.
Or/and - maybe - people just aren't bothered to look. Not meant to be a put down, but more a statement of what is.

It was only a thought.

If I scroll the blue bar up and do it again I see this: 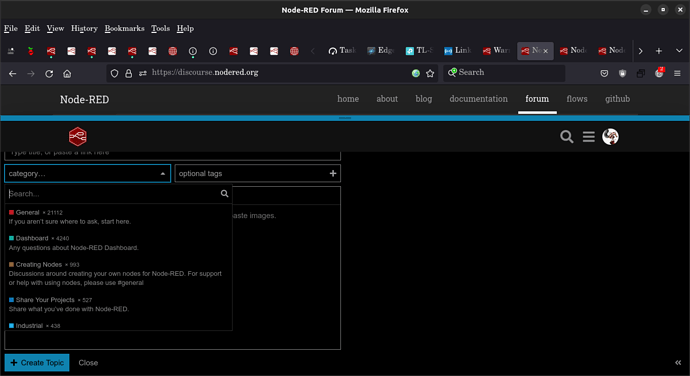 And the default is NOT General but Dashboard.
Sorry that isn't shown.

Maybe - another thought - is where in the list that option is.

It is too close to the top.

Also - yeah, another thought - when posting NEW threads: Is there a way to have a template?

If possible for such subtopics you could put a template.
Ok, I'll shut up. Just a thought.

Maybe because you are in Oz!

Yeah. You weren't supposed to be that quick on seeing that bit! (Drats!)

The dropdown list is dependent on where on the screen it is.

Nope, not for me. Not in Edge, nor in Firefox. The window appears above as in your example but always shows the first entry which is "General" at the top of the list.

If I scroll the blue bar up and do it again I see this:

And if I do that, I still see general at the top as you do. Both show the same thing.

Maybe - another thought - is where in the list that option is.

Yes, that had occurred to me as well. I don't know though whether Discourse lets you change the order. OK, I do know now: How do I change order of categories? - support - Discourse Meta

By default, the list is shown in order of use. But it can be changed to a fixed order.

Also - yeah, another thought - when posting NEW threads: Is there a way to have a template?

I believe that categories can have default templates.