Just a simple node that does nothing; pass everything on the input to the output. This would allow in-line comments which could be helpful in complex flows.

Not sure it's worth the effort.

Use a function node that returns msg.

Or a switch node set to something that always evaluates to true.

Or simply place a comment node over the top of the wire?

You could also simply just name the gate 2 node as you've named the comment?

In a complex flow, putting comment nodes on top of wires just gets more messy. And since you can't attach the comment node to a wire, it doesn't move well like normal nodes that drag the wires with them.

Not sure it's worth the effort.

Use a function node that returns msg.

Or a switch node set to something that always evaluates to true.

Or simply place a comment node over the top of the wire?

V1.1.0 is not too far from release. There is a new grouping feature with custom colour and better text comments support.

Hang fire a little while.

I doubt this will happen. It doesn't make sense to me at least. I think the upcoming node grouping feature will help a bit with this as you can visually group a comment as part of a group. I can understand your concern for this though. I almost never use comment nodes as it bothers me visually to have the boxes just floating nearby...

Again you beat me with just a tiny bit with a similar answer. I blame answering on a tablet, using the virtual keyboard!

Why not use an empty subflow ?

You can style it with whatever color and icon you want. 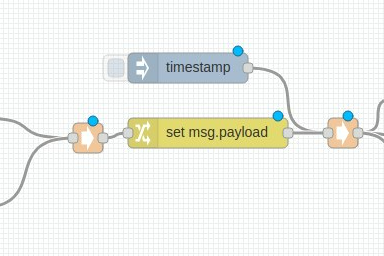 Why not use an empty subflow ?

and don't forget you can also add hover-over labels on node pins as well to help remind you what they do.

The fan node does what you want now.

Except that isn't the purpose of a function node. Whereas a comment node's purpose is to provide comments. Inline comments would be useful however.

Also keep in mind that using a function node for that purpose would introduce a small overhead because the code is executed using the vm module. Albeit just for returning the message unchanged...

I'd go for the subflow solution or the group feature coming in 1.1.

Not the fan node?

Personally, I prefer the solution that doesn't require extra nodes.

Yeah, and I do agree in a lot of ways.

And as per it's original design it allows a lot of wires to be joined together and make the flow a lot tidier than without that node. So I get a win win scenario.

Originally it didn't support names/comments as it does now. Only after I sent off a couple of requests to the writer did he add this option.

So, I sort of have a bit of a skewed perspective on the node. But it does (now) have the extra functionality to allow names and comments.

(From above: routines....)
Blocks of nodes arranged and definitive in and out node points.

It would do nothing other than pass the msg along

And anything else people come up with

Should allow for easy colour change

I understand people like to create nodes for every edge case, but often it ignores what is easy to do with the core set.

The fan node for example - can just be a Change node with no rules configured in it. Has the added benefit that everyone has that node already and doesn't make it harder to share flows with others.

Should allow for easy colour change

Nodes cannot change their colour - that is a particular feature of Subflows.

Can this not be added to the Comment node? If we are still talking comments.