Hi,
I was working on a node-red server (v1.3.7) and all the default labels of the editor disappeared after a flow deploy.

Among others, the deploy button now shows "deploy.deploy", menu items are like "menu.label.edit" and "menu.label.search", and it also affects default node names (e.g. an unnamed inject timestamp node that used to show as "timestamp" now shows as "inject.label.date", and a change node for multiple properties is now "change.label.changeCount").

Different Node-RED servers show fine on the same browser. This server still shows badly on other devices and browsers.
I tried restarting Node-RED on pm2 (through which it's usually running as a service on windows) and on the command line, with no success.

Ideas on how to fix this would be very welcome, thank you.

Use this reference for all command-line switches: Running Node-RED locally : Node-RED

Back out the most recent change, then redeploy.
See if that fixes the issue.

Hi again,
Neither '--safe' nor rolling back a deploy worked. I also checked that it's using the right directory and settings file, and that the settings file was unchanged (I had a copy).

Just noticed that the version running seems to have changed. It still shows as 1.3.7 but the editor now has right-click menus which are from later versions (3.x I think?).

Node red cannot update itself so something you did caused it to be updated. As for the menu showing old version number, try clearing your browser cache (do a hard refresh)

Hi,
Stopped node-red, cleared the cache, restarted, and it's still showing v1.3.7. Command line logs also show 1.3.7.
I installed some packages with npm yesterday, but I kept working on node-red after that (including some deploys and a restart) with no issue for several hours so I thought it was unrelated.
I'll try uninstalling those, too.
Thanks

It could be a bad package but it does look as though there is some file loss or corruption.

Question, why are you sticking with a very old unsupported version? There are many compelling new features in 2.2.3 and even more so in 3.0.2.

Uninstalling the packages didn't work. It does seem like file loss and it does seem like I'll have to reinstall.
(Bonus issue: the node palette won't open)
I spotted a "Missing ENV var CONFIG_PATH" in the start logs, but there's no info on it. It's not in any settings or config files either. Found a few mentions to the same error here in the forum, but they either went unanswered or were solved by reinstalling.

And yeah, a newer version would be great. But though I'm looking after it for now, this is not my installation and I'm not that familiar with the setup yet. It was in the plans for later, after I finished moving back-end tasks to other servers. Also, the dashboard tends to lose formatting at the smallest change, so I assumed the upgrade would likely destroy it and require lots of patience to fix and bring back online.

Guess that's ahead of schedule now

(On the plus side, all the flows having been working as normal. It's just the editor that's unreadable.)

Thanks again for the help

I also have this issue - and I see it with a brand new docker install. Is there a flag or an env variable I'm missing? Don't see much here - Running under Docker : Node-RED 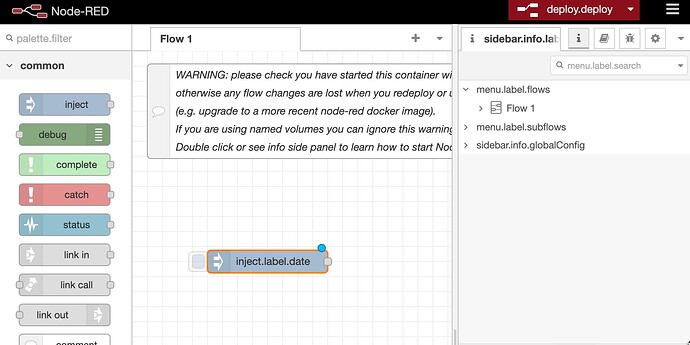 Weird, it seems like it has to do with docker compose? (Which makes no sense). I fiddled with minimizing the difference between

started with: docker compose up -d

The docker compose one have no data persistence, no env variables, no custom config, but still show this issue -- so can't be corrupted flow data or anything like that?

okay - it legit just went away.

I'm back to my original docker compose above and the issue is resolved. No idea what I did. My server/data configuration is the same as it was at the start.

Maybe clearing browser cache? I did that a bunch throughout my fiddlin - but the issue never resolved right after I did it.

Glad yours cleared up on its own.
Mine remained broken through a week of fiddling (while I tested an upgrade on another device). I tried clearing the browser cache and using other browsers or computers, but no luck. Not sure if that means something else solved yours or if our issues actually had different root causes despite looking the same.
In any case, a complete reinstall of Node.js and an upgraded Node-RED solved mine.

Silver lining: It's all good and I get to work on a nicer editor now. (the right-click menus and the junctions really improve the experience)

It just started happening again - I haven't upgraded or changed anything.

I tried clearing cache, and restarting node-red. Also tried a browser I don't normally use (firefox). That still showed the problem.

All works, config is in place -- labels are still borked. So not sure that "reinstalling node red" fixes this. Gotta be some bug or a configuration setting, right?

Are you using the latest version of node-red now?

Sorry, I'm not very familiar with docker (just vaguely know what it does), but does that also rebuild node.js? Because I suspect my issue may have been something on that side and not on node red directly.

A bug is always a possibility, but I'm not sure it's about node red configs. Those should be kept in the settings file, and I haven't changed mine. Also, at the time, I tried running node red on an empty directory and the labels stayed gone.

Do tell if you manage to figure out what causes this, please. It'd be good to know what to avoid.

@Colin I am using nodered/node-red:2.2.3 off dockerhub

Just realized this only happens when I load node-red through my proxy (nginx). If I load it direct :1880 then the labels load.

When I load through the proxy I don't see that request. There are more than a few other changes.

Overall node-red works just fine, hard for me to tell what to look for in this context. Is there a way to enable console debugging?

removed http2 and seems to have fixed it

Talking to yourself is a sign of something I'm sure ...

Yes, this is because I don't think http2 supports websockets. Least I think that's what it is, I know I also had to remove that from NGINX config. websockets requires http 1.1

re-confirmed i do not have http2 enabled on my nginx server. must still be somethin else.