The purpose of this post, is to engage users of node-red-contrib-zwave-js (node) - Node-RED.
According to analytics, where opted in of course, around 130 active installations are known with this Node.

And this is why I would like to engage anyone who is using this node.

Open ZWave officially closed shop on November 17th 2022, I therefore would like to ensure what I provide, continues to benefit users, present and future as a result of the work we do at ZWave JS!

I am starting have started the development of v9!

There will be some changes (all positive), but there will be some unavoidable breaking changes along the way - moving to config nodes is one (allthough it does allow unlimited zwave networks - so let me have that at least

I would like to ask my beloved users (who ever you are), what you would like to see (or not) in the next major version - don't be silly now 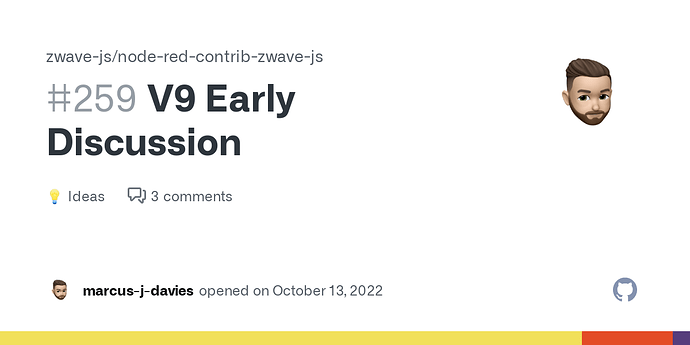 @crxporter I'm dragging you down with me 😄 but anyone is welcome Initial Goals Transition to typescript Better type affinity in config values (and throughout) Less error prone Easier for contri...